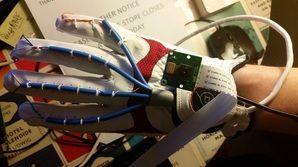 31st January 2015:  I decided to add the picamera back to the Glove but, placed it around the back of the hand area, this linked in well, enabling a more mobile use of the camera, it can now be positioned in a direction that the user wants, is more accessible and you could even take a selfie!  The main reason for this change was to allow 'on the fly' optical charter recognition.  I installed a Python OCR library and combining this with the image taken from the picamera, the software can identify the  text within the picture.  This text is then feed back to the console – easyspeak then reads out the text.  I tried various file formats, JPG seemed to work well.  Also, changing the picture to black and white to pick up detail and differentiate between the text had improved results.  There were issues with it not identifying text in low light and also if the text was the wrong way round or upside down used. Finally, changing the saturation and increasing the sharpness produced usable results.
26th January 2015: Transfer worked -  Glove now on new Raspberry Pi B+ model.  I had to install more libraries, I realised I had not installed the Python libraries.  I tested the old social glove code and it worked.  Next up I connected the HACK HAT and the the first wires to the GPIO pins for the 'time' function.  This throw up an error message as I had also called the definition / function time.  I renamed it time_response and it worked.  Press button one on the Glove and it collects the current time and reads it out.
16th January 2015: Time:  The current time is captured in a variable using the code, current_time = (time.strftime("%H:%M:%S")) then it is printed to the console window with print current_time.  Espeak is then used to read out the time.  Basically the first button returns the current time.