Project New York is the project name for a Wearable Social Media Glove.  With the advent of Google Glass, Android and Apple Smart Watches and various other hacks it points toward a future where we will wear the gadgets that allow us to communicate with each other.  (Before they are embedded into our bodies).  The more natural or ergonomic this medium becomes then the more likely we are to use it.  So take a Raspberry Pi, a few buttons, wires, GPIO pins and Python and here we go...... (development diary is shown below).
UPDATE 11 28.9.2014: Reading form a File.
The Glove now speaks and gives the wearer instructions and responds to your inputs.  The train data is downloaded and stored in a CSV file but needs a little tidying up before it is usable.  This is achieved by opening the file with, open("traintimes.csv")  and then create a variable for example data = read_file.read().   I then created a list to store the train data and  used train_time_list.split(",")  to split the data into single parts.  The final part was to pull out each part of data as required, the departure time, station, platform and train status, final the espeak.synth was used to read out the data.  The Project is being tested now (October 2014)
UPDATE 2:Nearly Working 3.9.2014
The code is working but, the 3rd button prompt keeps running in a loop even when the button is not pressed.  This is a problem as the buttons are over responsive and do not responded in a natural way.  This may have been related to the use of the GPIO.BCM vs the GPIO.BOARD layout. However, several tests proved this had no impact. Luckily @gbaman1 was on hand to support and pointed out that the GPIO pins require a PULL UP RESISTOR, this is enabled by using the simple code, GPIO.setup(18. GPIP.IN, GPIO.PUD_UP).  Success!  Now there are four fully functioning buttons.
UPDATE 1:Beginnings: 1.9.2014
Concept: Create a ‘wearable tech’ glove than enables the user to interact with social media.  Using your fingers you can take a picture, tweet the picture, email the picture and even broadcast a message over a Radio (this is more for fun!).   The glove will be mobile with a 4 -6 hour battery life.  Finally, as there will be no GUI the system will update the user via voice feedback.  The starting point of the project is to combine the buttons with the GPIO pins, contact the wires  and code a ‘test’ response to the user pressing the button, here we go! 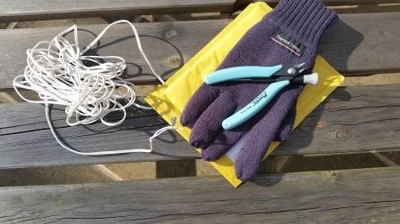 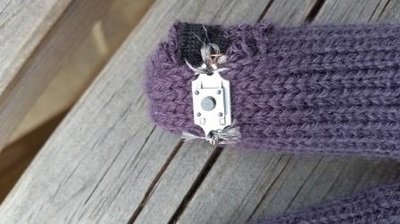 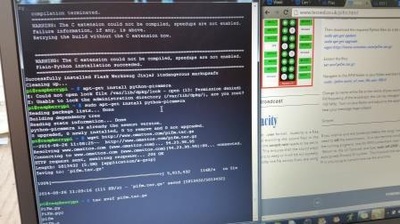 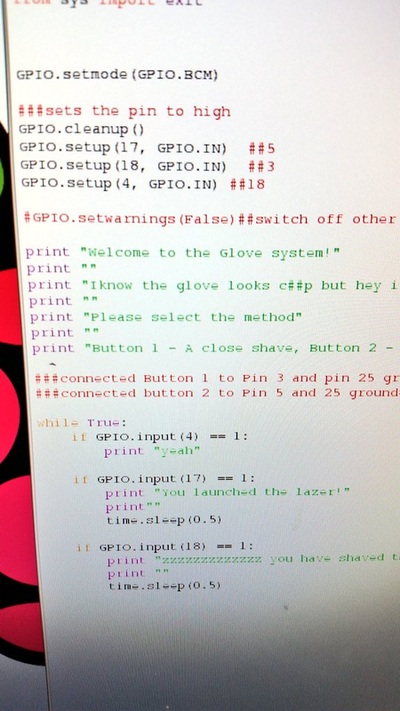